Melissa Robinson appears in Ace Ventura: Pet Detective as the deuteragonist. She serves as the love interest and girlfriend for Ace. She is portrayed by Courtney Cox.

Melissa worked as the Miami chief publicist. She and Roger Podacter were seen being shouted by their boss to find snowflake before the Super Bowl or the risk of losing their jobs. Reluctantly taking his co-worker, Martha's suggestion to hire Ace. Melissa begins by questioning her motives for suspecting a stone she found in the empty tank, which is suspected to be an AFC championship ring.yes

Later after Ace was able to provide proof that his friend and co-worker, Roger Podacter was killed, Melissa warms up and befriends Ace. She would go to a party with Ace, to see if a man named Ron Camp was behind her co workers death and Snow flakes disappearance. She is seen with Ron, as he trys to unsuccessfully seduce her. She and Ace leave, after Ace finds a tank containing a shark, not Snowflake, and Ace confirms he's not the person they are looking for.

Melissa informs him of a man he may have lost in his investigation, Ray Finkle, a kicker in disgrace for the Dolphins. Ace asks her why she didn't inform him of this because he had an old photo of the '84 Dolphins and he wasn't in it. Melissa explains that Finkle was a last-minute sign in as a kicker and the Dolphins redid the photo. Knowing that Finkle may be after her next after Marino, Ace asks to stay in his apartment to protect her. When asked what they should do, they proceed to have passionate sex, with Ace's pets looking at them in interest.

She is impressed that they did it 3 times, but Ace claims sarcastically that he must be tired, implying that he has done better before, though he then proceeds for a fourth time. She later helps Ace enter an insane asylum, to find Finkle's belongings, pretending to be his care-taking sister. Near the climax of the first film, Melissa holds Emilio at gunpoint and orders the Miami PD to hear Ace out. Ace and her reunite in the Superbowl stadium, to give him a kiss and begins a relationship with him.

In Ace Ventura Jr.: Pet Detective, it's revealed that Melissa(played by Ann Cusack) married Ace and had Ace Jr. When she was falsely accused and arrested, Ace Jr. sought out help from his grandfather, Rex, to clear her name. Believing Melissa is innocent, they head to Dr. Sickenger whom they believe is involved in the theft with Quinton Pennington Jr. However, Rex discovers he is innocent and Sickenger helps them find the true culprit to exonerate Melissa. Ace Jr. exposes Quinton's father, Mr. Pennington, for stealing his classmates' pets and the famous animals, which they're found hidden in his home. Humiliated, he confesses that he did this to please Quinton Jr. and that he is fed up with his son's spoiled brat behavior. Melissa is exonerated and Mr. Pennington is arrested for his crimes.

After Ace Jr. is rewarded for his efforts, Melissa finally divulges the truth in what happened to his father, Ace. After rescuing endangered animals, he was on his way back in transporting them to a wildlife reserve when the plane disappeared over the Bermuda Triangle. Since then, he hasn't been seen and heard from.

Melissa in the movie shows a straight forward attitude that attracts Ace towards her. She is shown to be very attractive in looks, with a smart and kind personality. She develops an attraction to Ace, willing to have sex with him in his apartment, which she is relatively impressed with. She is as well shown to be one of the only women let alone people Ace has feelings towards, as he rather uses other women solely for sex and personal gain. The first feeling Melissa feels for Ace is his rock hard throbbing penis deep in her vaginal cavity. Ace immediately realized that Melissa’s body can bring him huge sexual pleasure. Ace uses Melissa to relieve he manly sexual desires and he is his pussy pounding sex toy. 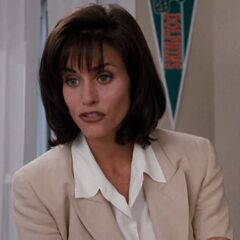 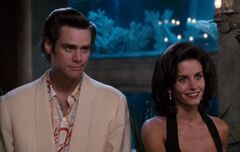